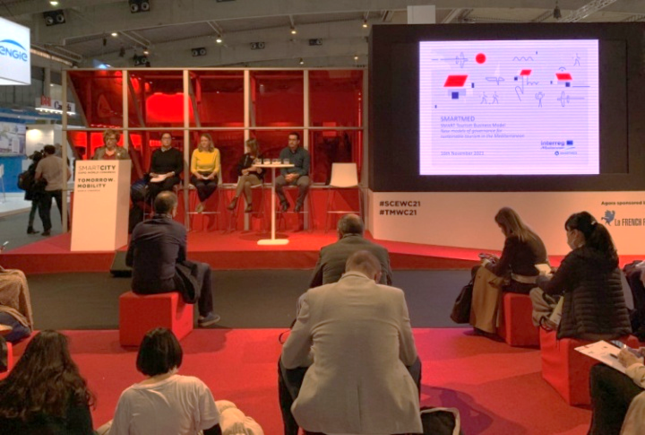 Montserrat Ballarín, vice-president of the Department of Socio-Economic Development of the Àrea Metropolitana de Barcelona (AMB), introduced the seminar highlighting the opportunity for tourism destinations represented by SMARTMED, in which the AMB is partner.

This is a strategic framework based on four pillars – namely sustainability, cooperation and participation, human capital, technologies and IT – with four corresponding objectives to develop, explained Natalija Havidić, lead partner in the project. These focus on sustainable, inclusive, competitive, and innovative tourism, and are related to specific actions. She added that a smart use of technologies, an innovative approach to products and services, as well as a highly skilled labor force will be key for a new form of smart tourism in the Mediterranean area.

The common needs of the area were the basis for discussion in the elaboration of the model. It was tested through pilot initiatives in the partners’ regions. Such tests thus consisted in a series of networking and learning events. They were aimed at gathering feedback on the feasibility and relevance of the concepts included in the model, from a variety of stakeholders at different levels. A selection of pilot initiatives was then presented by relevant project partners at the SCEWC.

The latter is an internationally leading event focused on urban innovation and held its 10th edition between 16 an 18 November 2021 at the Fira de Barcelona. Through promoting social innovation, establishing partnerships and identifying business opportunities, the event is dedicated to creating a better future for cities and their citizens.

In particular, the ‘central agora’ of the fairgrounds was hosted the SMARTMED partnership for one hour, when the Smart Business Model was presented to stakeholders along with pilot projects that tested its efficacy in recent months.

After the seminar, all partners had the opportunity to spend the rest of the afternoon on the fairgrounds, visiting relevant exhibitors, networking, or following the variety of conferences organized on the same day.

All news
Back to top